MCB which stands for miniature circuit breaker and we can have it of 1 pole, 2 pole or more. The main purpose of this device is to break the circuit in these two cases:

- First, when we have an over load connected during a certain amount of time.
- And second, when we have directly a short circuit.


But first, what is an over load? Well, to protect our homes, each room or small sector is limited to a certain power. Let’s say 2000W. You will see the electric panel with different breakers for different rooms or sectors of the house. Usually kitchens with electric heaters, boilers, ovens and so on would be rated to a higher power or have a separated breaker just for that high-power heater. If that power limit is overpassed for a long time, let’s say instead of 2000W we connect a 3000W device, the cables would get quite hot since they are not suited for that power. That power could even get to melt the wires or create fire inside of the walls, and of course, we don’t want that. To prevent that, we use the thermal breaker capabilities of this device. 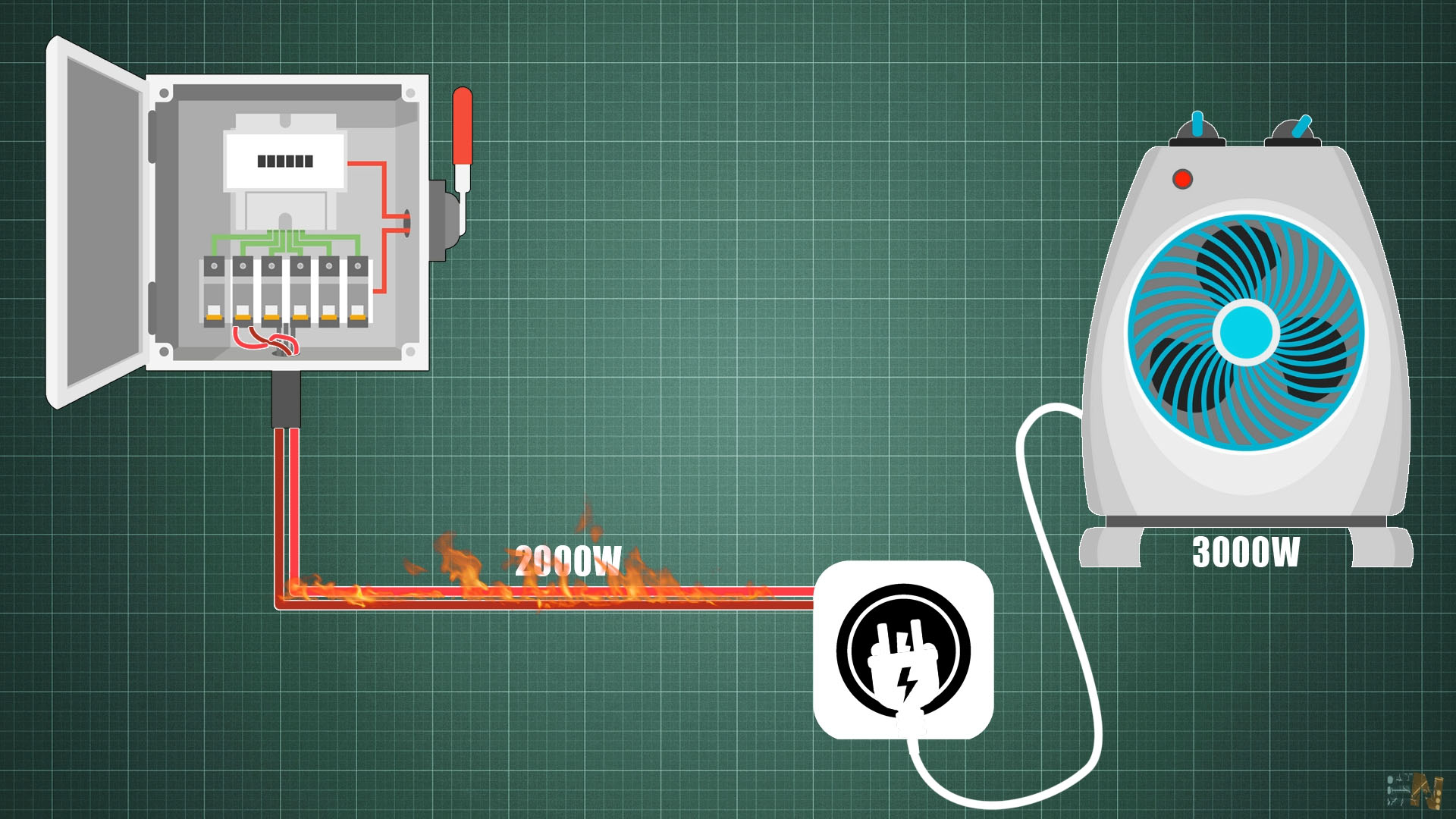 We will open the MCB and see how it works inside. This model is a B13, that means is rated for 13 amps for a period of approximately 1 hour. 13A at 230V, that should be a power of 3000W or so… To simulate an overload, we could connect a hair dryer of 2100W, a toaster of 1400W and an electric heater of 2000W so a total of 5500W as we have did in the video above, that should be enough to trigger the thermal breaker.

I use my drill press and remove the metal rivet, since these devices usually don’t work with screws, so we have to totally remove the metal rivet. Ok, now we can open the enclosure. So let’s see what we have. First, we have two connectors (1), the input and output contacts, and here we connect our wires. Then we have the plastic lever (2) that we use to open and close the switch.

In the middle we have the so called arc driver (3), which prevents plasma arcs to from, when the switch jumps. Above the plastic switch, we have the actuator (4), which is the part that moves. This component will make the contact with the terminals or brake the circuit when needed. And finally, the most important parts are the thermal metal strip (5), which is this one below, and the magnetic coil (6).

Let’s first see how the thermal breaker works and then the magnetic part. When I push the switch up, it will enable the current flow because the actuator will touch the copper connector below. The important part is the small metal leaver and the metal strip. When we have too much current passing through that metal strip, it will heat up. Its dimensions are well calculated so it will start heating up after a certain amount of current flow. When a metal heats up, it will change its shape, due to metal dilatation. A small shape change is enough to push the small laver up. And looks what happens when I pull the laver up, example below.

Yes, the entire actuator will jump and open the circuit. That’s because this laver is connected to the plastic part of the actuator. And when we pull it up, it releases the tension and since we have a spring below, it will pull the actuator away. So, that’s how the thermal protection works. Too much current, the metal strip will heat up and change its shape, that will give push the laver up, and by that releasing the actuator and interrupting the circuit.


But now, how does the magnetic part of this breaker works? Well, first of all, that protection is against short circuits. Since we have a B 13, the B will mark that it’s rated to 3 to 5 times the 13 amps when a short circuit occurs. As you all know, when we have a short circuit, a huge amount of current will pass instantly, since the resistance is practically 0.

The current path is trough the coil now. The huge amount of current will create a strong magnetic field that will push that metal piston up instantly. That, once again will release the actuator and interrupt the circuit. So that’s how the magnetic breaker of this devices works.

The thermal protection changes the metal shape and remove the laver and the magnetic protection creates a magnetic field and pushes a metal piston. That’s why this device is a thermal magnetic breaker, because it has both protections in the same device.

Ok, but this MCB won’t protect us, only the wiring. I mean, if I touch the wires and shock myself, the MCB won’t do nothing, because the current is not high enough and we don’t have a short circuit neither. That’s why we have the RCCB or residual current circuit breaker.