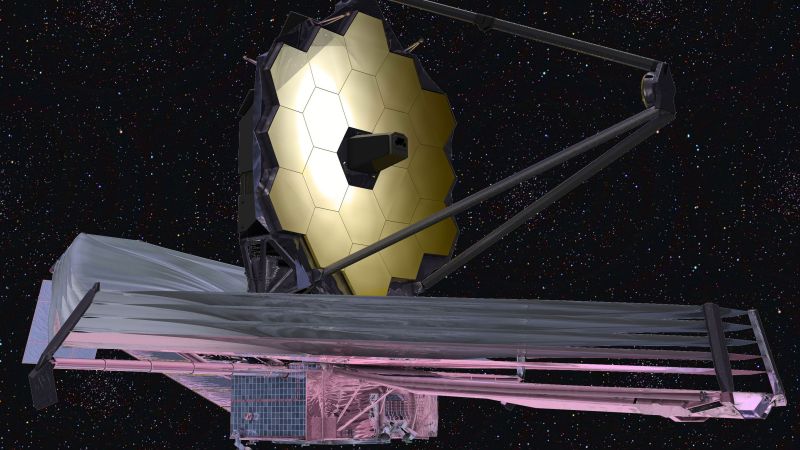 Back during the 2019 Superconference in Pasadena, I had the chance to go to Northrop Grumman’s Redondo Beach campus to get a look at the James Webb Space Telescope. There is the high-bay class 10,000+ cleanroom in building M8, my wife and I along with fellow space nerd Tom Nardi got a chance to look upon what is likely the most expensive single object ever made. The $10 billion dollar space observatory was undergoing what we thought were its final tests before being packaged up and sent on its way to its forever home at the L2 Lagrange point.

Sadly, thanks to technical difficulties and the COVID-19 pandemic, it would be another two years before JWST was actually ready to ship — not a new story for the project, Mike Szczys toured the same facility back in 2015. But the good news is that it finally has shipped, taking the very, very slow first steps on its journey to space.

Both the terrestrial leg of the trip and the trip through 1.5 million kilometers of space are fraught with peril, of a different kind, of course, but still with plenty of chances for mission-impacting events. Here’s a look at what the priceless and long-awaited observatory will face along the way, and how its minders will endure the “30 days of terror” that lie ahead.

It may seem self-obvious, but the James Webb Space Telescope is big. Pictures do a poor job of capturing the scale of the thing, and even when they show people working on it, it does little to compare to the experience of standing there looking at the thing. The JWST is large in a way that no other object I’ve been near has felt. It towers over you, an ungainly thing even in the semi-folded state we saw it in. And looking at the size and complexity of the structure, and especially its apparent fragility, anyone with any engineering curiosity is left wondering how the heck they’re going to manage to safely move that thing. 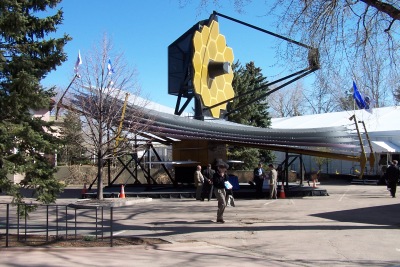 Of course, JWST is designed to be moved, and to fit inside the 5.4-meter fairing of the Ariane rocket that will take it to orbit. But before it gets integrated onto its rocket, the telescope had to be folded into its custom-built shipping container. The Space Telescope Transporter for Air, Road, and Seas (STTARS) is basically a mobile cleanroom designed to hold Webb in the same folded configuration it will be in for its trip to space.

STTARS had been used to transport Webb several times before as it was shuttled around to various NASA facilities for testing and assembly, but on September 24, 2021, Webb began its last journey in STTARS. After being packaged up, the shipping container was loaded onto a special oversized-load tractor-trailer. In the wee hours of the morning, steel-nerved driver George Ardelean piloted the unwieldy load 26 miles (42 km) through the streets and freeways of Los Angeles to Naval Weapons Station Seal Beach, where its ride for the next leg of its journey, the cargo vessel MN Colibri, awaited.

On September 26, the MN Colibri pushed off from the dock and made its way south and east, bound for the European Space Agency’s Spaceport in Kourou, French Guiana. It was attended by a team of NASA engineers who monitored the health of the spacecraft during its 16-day trip, which included a passage through the Panama Canal. Upon arrival at Kourous, Webb was trucked to the ESA’s integration facility, where it was unpacked from STTARS and transferred to another cleanroom for final testing, fueling, and integration with the Ariane 5 launch vehicle. 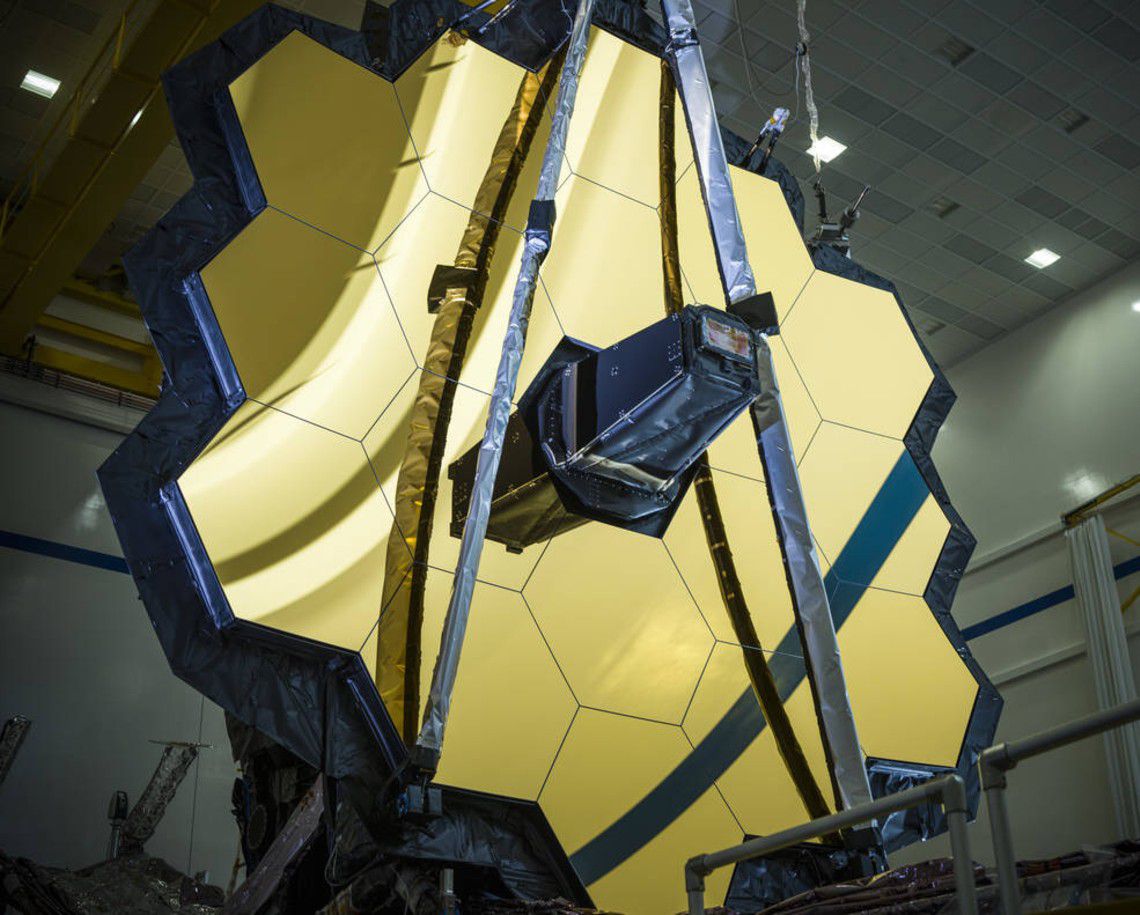 Assuming all goes well with testing and integration, Webb is scheduled to launch on December 18, 2021, at 7:20 EST. The launch begins a roughly one-month voyage to the observatory’s home at Lagrange point L2, during which time any of 300 single-point failure items could scuttle the mission. Like the “Seven Minutes of Terror” that Mars landing missions face, Webb’s minders will face 30 days of uncertainty and occasionally nail-biting suspense.

During the eight-minute ride to space, Webb will be subjected to the usual indignities of spaceflight, against which it was thoroughly tested. Starting at about the 30-minute mark, the first milestone — deployment of the observatory’s solar panels — will occur. It’s the first of 50 deployments, and is a critical step since the telescope needs the power from those panels; it has no other source of power onboard. With the solar array deployed and tested, the high-gain antenna will be deployed and tested.

About 12 hours into the mission, Webb will fire its engines to set it on course for L2. Three days later, the sunshield pallets that are stowed along the front and back sides of the main mirror will fold down to their final position. Once that’s complete, the mast holding the main mirror will be jacked up to clear the sunshield. Even though the sunshields will still be folded at this point, they still present a significant surface area to the solar wind, so trim tabs at the end of each pallet are deployed to help adjust for the pressure.

Full deployment of the sunshield is without a doubt the sketchiest part of the whole process. The sunshield consists of five separate metalized Kapton sheets, each the size of three tennis courts. Each one must be unrolled, extended to its full size, tightened, and spaced out vertically for the sunshield to do its job. This takes the coordinated action of 140 release mechanisms, 70 hinges, eight deployment motors, about 400 pullies, and nearly 400 meters of cable to accomplish, not to mention the sensors, wiring harnesses, and computers to control everything. It’ll take the better part of two days to complete the sunshield deployment.

Once the sunshield is deployed and tensioned, the optical deployment will begin, about 10 days into the mission. The process begins with the secondary mirror, which rides on a triangular boom that is folded against the center section of the main mirror. This makes way for the main mirror’s two side wings, each holding three of the 18 total hexagonal gold-plated beryllium mirrors.

A number of other steps, such as radiator deployments, cryocooler startup, and system checks are also accomplished during deployment, but the spacecraft will be in operational configuration by about day 14 of the mission. This is the best-case scenario, of course — mission operators have another two weeks or so to get everything just right before Webb arrives on-station and assumes its halo orbit around L2. Controllers will still have a bunch of work to do, including bringing the instruments down to operational temperature, and carefully tuning the main mirror. Each segment of the mirror is fitted with servos that can slightly deform its surface; the servos were clearly visible on the sample mirror section that was on display at the Northrop Grumman plant, and the entire thing was a marvel of engineering. Operators will carefully align each segment of the main mirror, along with the secondary mirror and the fine steering mirror located at the center of the main mirror, to form as perfect an optical system as possible.